EXO-SC is surely on its way to 1 billion views with 1 Billion Views!

EXO’s power-packed duo Sehun and Chanyeol are back as EXO-SC, with their first full length album titled 1 Billion Views. The two artists showcase a range of musical styles within the album. 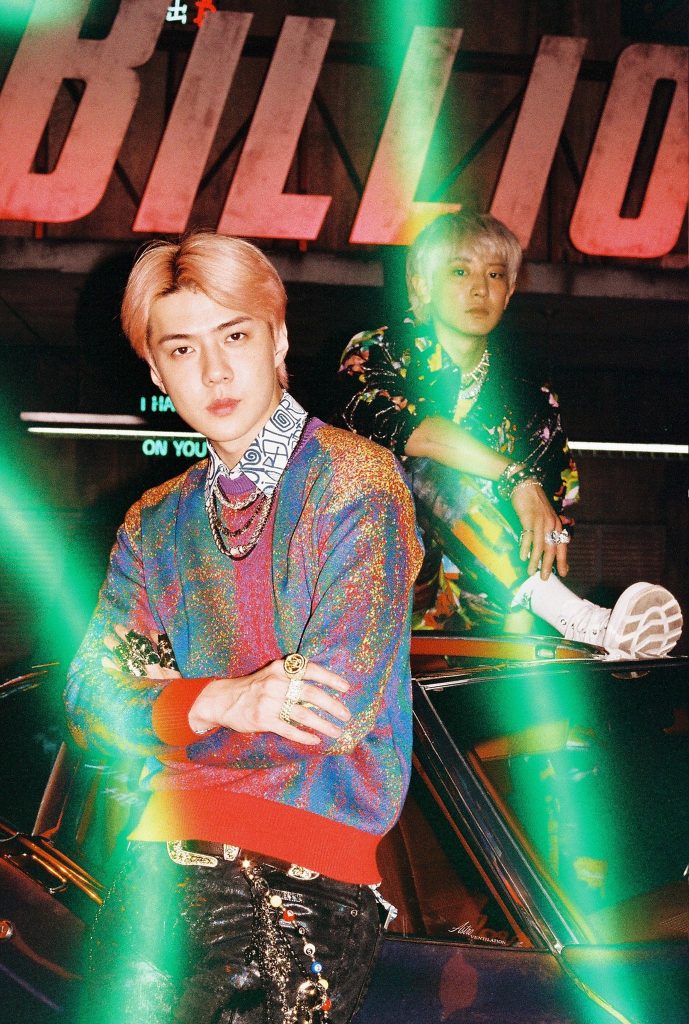 From the eponymous title track, the spectacular solo tracks, “Nothin’” and “On Me,” as well as groovy tracks such as “Say It,” and ‘Telephone,” fans will definitely have a variety of bops to select from!

The duo made an exciting post announcing their first full length album 1 Billion Views, on their official SNS on June 23.

On July 1, both unveiled an interesting schedule poster of their upcoming album 1 Billion Views. The track list of the album was also revealed within the poster itself.  The poster is cleverly designed to say the least. It is reminiscent of a video streaming site and is reflective of the album’s name. The track list is placed on the side to mimic a playlist list on a video streaming interface. 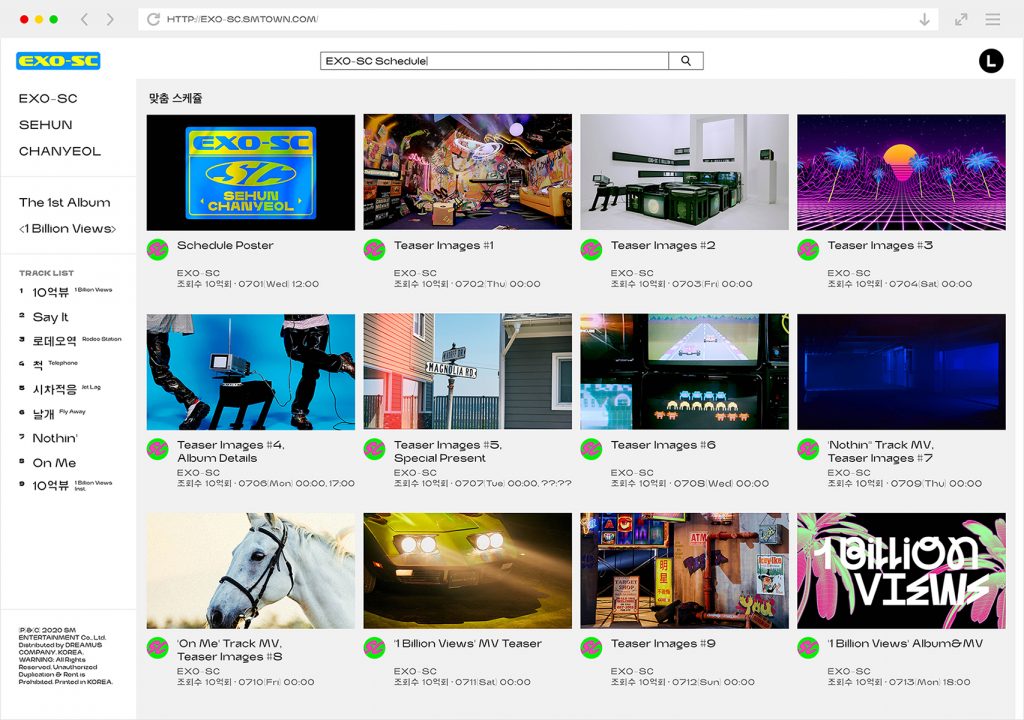 On July 1 and 2, Sehun and Chanyeol dazzled in their first concept images. The images showed off the duo’s charm in glamorous individual stills. EXO-SC truly embodied the retro look in these stills!

On July 3 and 5 they unveiled new concept photos yet again, only this time, in grand and eclectic shots of both members together.

On July 6, Sehun and Chanyeol had given a sneak peek into the look of the “Telephone,” music video a day prior to the release. They had uploaded vibrant photos that showed off the two EXO members rocking that charming boyfriend looks. 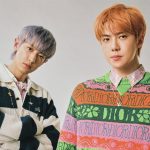 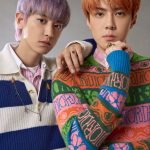 While on July 7, the duo unveiled the first music video for “Telephone (feat 10cm),”from their upcoming album. The music video is a visual treat as Sehun and Chanyeol look absolutely spectacular in their bright, aesthetically appealing candy colored looks. The music video shows the two rapper-singers looking gloomy as they fervently keep waiting for someone’s text.

Soon after, on the same day, they delighted fans with more photos to commemorate the release of their first music video from 1 Billion Views.

Chanyeol dropped his electrifying music video for his solo track from the album titled, “Nothin” on July 8. He also unveiled mystifying images depicting the theme of the track through them.

On July 9, Sehun surprised fans with an impressive music video of his solo track from the album titled, “On Me”. Compared to Chanyeol’s “Nothin’” that takes influences from the K-R&B genre, Sehun opts for the K-Hip-Hop route and delivers impressively just the same. Moreover, he wows fans with his dynamic dance moves. Also, the video marks two adorable guest appearances in it as well! Sehum revealed stunning pictures from the music video as well.

On July 10, EXO-SC gave a sneak peek to fans for their track, “1 Billion Views (feat. MOON)”. The teaser was a color fest to say the least. The two musicians only furthered the anticipation of fans after they revealed concept images for the title track as well.

The album contains 9 tracks in total, including the titular track, “1 Billion Views”, “Say It”, “Rodeo Station”, “Telephone”, “Jet Lag”, “Fly Away”, “Nothin’”, “On Me”. The album also includes an instrumental version of the track “1 Billion Views” as well.

Opening the album with their eponymous title track “1 Billion Views”, EXO-SC is sure to leave listeners speechless! The track features songstress MOON lending her serene vocals alongside Sehun and Chanyeol.

“1 Billion Views” is composed of heavy hip-hop influences with a twist of funky guitar and disco rhythms. The lyrics were written by Sehun, Chanyeol, Dynamic Duo’s Gaeko and Rhythm Power’s Boi B, while the track was composed and arranged by Gray and Sole.

The lyrics are a witty expression of how they keep thinking about their loved one as if watching a video on loop, giving it 1 billion views. Lines such as, “When you’re around, even your breathing, its ASMR to me/Just the two of us/This fantasy web drama, 4K high definition camera/It’s not enough to hold you/I heard the thumbs/Girl I need a one dance” add a stylish streak to this million dollar song.

Next up, Penomeco lights it up with Sehun and Chanyeol. “Say It” is a through and through banger. The bright synth, soft bass, and EP based composition give this song a playful R&B like vibe. The lyrics talk about urging their loved ones to speak their minds. All three artists sound absolutely phenomenal especially during the hook which is catchy to say the least.

“Rodeo Station,” brings forward a sense of nostalgia particularly with the way it begins. The lilting guitar riffs are reminiscent of an early 2000s track. The uplifting melody is fitting of the track as it expresses the story of the artists looking back on their past and present lives.

The hip hop track showcases the duo reminiscing about their trainee days, of when they weren’t famous as they recall the scene around Apgujeong Rodeo Station. Definitely one of the best songs on the album.

“Telephone,” is a super-cool hip hop track fused with bright piano riffs and heavy bass. Besides 10cm featuring on the track, Dynamic Duo’s Gaeko also participated in the composition and writing of the song.

Lines such as “Throw another emoticon/No reply. Phone call/Iron wall no/When we meet, we only look at the phone/Pretending to be busy and replying late/Why do you keep pretending?” capture the duo’s lovelorn sentiment flawlessly. The song talks about unrequited love and its detrimental effects in today’s contemporary times.

This is one breezy number that taps into Sehun and Chanyeol’s vocal side. “Jet Lag” is an outstanding track that showcases the duo’s versatility in a flamboyant way.

The bright and slow tempo guitar riffs make an appearance on this song as well. The snares and percussive elements add that hip-hop touch to this track. The lyricism expresses the longing one has for their lover. The wistful, slow tempo melody brings out this sentiment beautifully. This is one groovy number listeners would undoubtedly vibe to.

Lyrics such as “They say a low flight is a fall/It’s gonna be weird. It’s gonna be weird/You don’t have any/That’s what the world says/Fly away” in Gaeko’s mellifluous voice will surely stir hearts. The song is comforting and showcases the profound side of EXO-SC.

Chanyeol showcases his musical prowess on ‘Nothin” as he fuses slow, low tempo trap beats that are layered with guitar riffs. The composition gives the track an almost alternative rock style. The track falls under the K-R&B genre especially due to its instrumentation and Chanyeol’s vocal style.

The lyrics of the song ‘Nothin” talks about Chanyeol wanting to unapologetically be himself. He asserts that he won’t worry about what others say about him and that, he will fearlessly walk on his chosen path without giving much though to people’s criticisms. “Nothin” is in actuality, everything!

Sehun opts for the K-Hip-Hop route in “On Me,” and delivers impressively on the track. It  is a hip-hop track composed of booming trap beats, heavy bass and warped synth. Sehun has co-written the track himself.

Through it, the vocalist expresses the sentiment of doing what’s best for oneself, working hard towards it till you make it to the top. He asserts the same in the lyrics with lines such as “I’ll do it my way off the wi-fi I’ll enjoy when I want to I’ll sleep when I’m sleepy”. “On Me” is unquestionable one to be on repeat.

If there is one word to describe the music video for “1 Billion Views,” it has to be : WOW (Yes, in capitals)! From the start to the end the video is a kaleidoscopic color fest that is sure to spellbind fans. EXO-SC members look dazzling in their jazzy attires.

The setting is equally impressive. It has a late 80s laid-back style with its dim, neon lit backdrop. Chanyeol looks absolutely handsome in the video, and surely enough, the viewers will not be able to take their eyes off them. The music video takes place in what can be considered a makeshift disco.

The funky effects such as recreation of SNS screens and slot machines with digital effects is impressive and spectacular. The grandeur of the music video only goes up with MOON’s appearance. The vocalist not only enraptures with her soft notes but also beguiles with her hypnotizing visuals.

Overall, the video is the perfect representation of the track and is undeniably worthy of 1 billion views!