The latest episode of It’s Okay To Not Be Okay brings the two people who have been hurt together again as it reveals the similarities of their painful past.

It’s Okay To Not Be Okay reflects another thoughtful narrative in episode 4. The latest episode draws attention on the fact that sometimes a parent’s love for their child may not always be selfless. In the end, they might have some expectations from the kids. 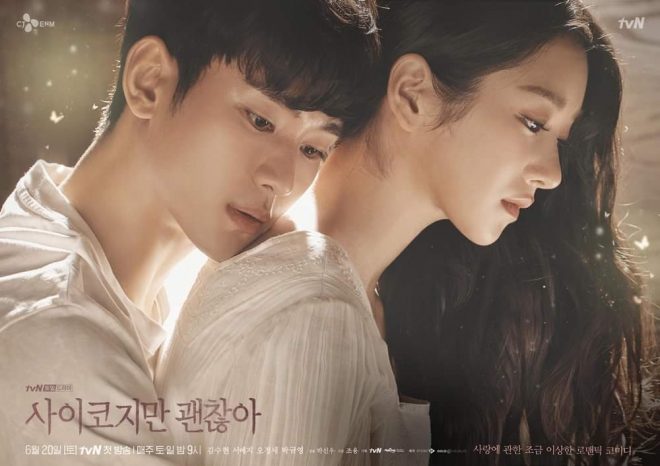 But, what the parents are not aware about is that sometimes they might be causing a huge toll on their children by inflicting their wishes upon them. Episode 4 of It’s Okay To Not Be Okay highlights another deep perspective on human relationships and its impact on their lives.

As the staff from OK Psychiatric Hospital takes Kwon Gi Do away, Nam Joo Ri (Park Gyu Young) asks for one of the family members to follow. Kwon Gi Do’s mother (Lee Young Sook) comes along but when she faces her son, she slaps him and rebukes him for causing an embarrassment to the family.

Following all these incidents, the hospital chief, Oh Ji Wang (Kim Chang Wan) calls for a meeting among the staff. Most of the people present want to get Go Moon Young (Seo Ye Ji) fired however the chief is hesitant and puts his decision on hold.

Meanwhile, Kwon Man Su visits the hospital to take an ire against the people who led his son to escape and ruin his campaign rally. Moon Gang Tae (Kim Soo Hyun) goes alone to face the complainant.

However, when Kwon Man Su makes harsh statements about his son saying that parents give birth to children so that they can fulfill their needs, Moon Gang Tae loses his cool. An exchange of words occurs and the politician hits Gang Tae for raising his voice. 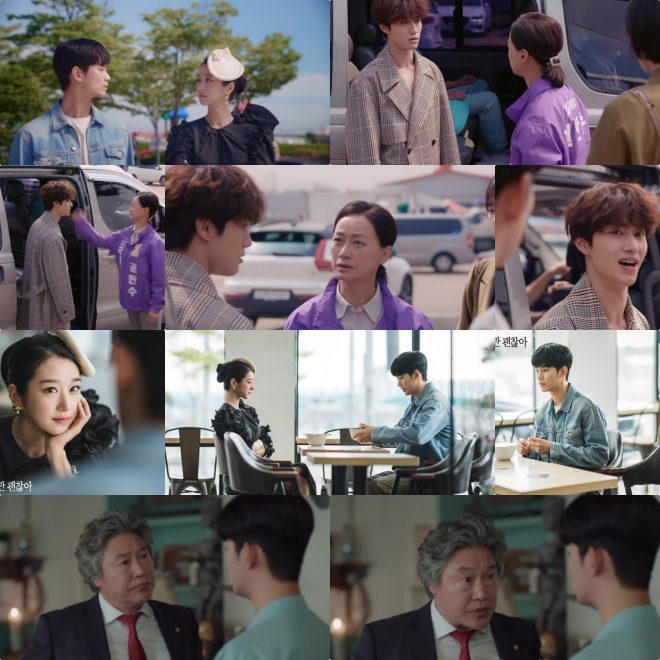 The Parents Who Caused Pain To Their Children

A flashback from the past revealed that a young Moon Gang Tae (Moon Woo Jin) was hurt with the amount of negligence he faced from his mother. His mother was always more attentive towards his autistic older brother. Therefore, she was only aware of her older son’s sufferings and not the younger.

On the other hand, Go Moon Young continues to see visions of her mother, who thinks of her more as prized creation rather than anything else.

Meanwhile, Go Moon Young who was adamant at not taking her sick father Go Dae Hwan (Lee Eol) for a walk finally decides to do so after Moon Gang Tae gets upset at her bashful comments about her father.

At the hospital, she runs into Moon Sang Tae (Oh Jung Se), with whom she hangs out for brief amount of time. As the two were having a conversation, an angry Moon Gang Tae appears, who asks his brother to get away.

Seeing that Moon Gang Tae was hit, Go Moon Young inquires him on what had caused that to happen. But, Moon Gang Tae fumes further in fury and asks her if she even know how to feel anything. Then, he tells her that she would never understand his feelings and leaves right away.

Thereafter, as Go Moon Young meets her father, she asks him if he knows her. Things go south immediately as Go Dae Hwan tries to choke her again and yells at her telling her to die. Go Moon Young smiles with empty eyes while a tear fall from them. 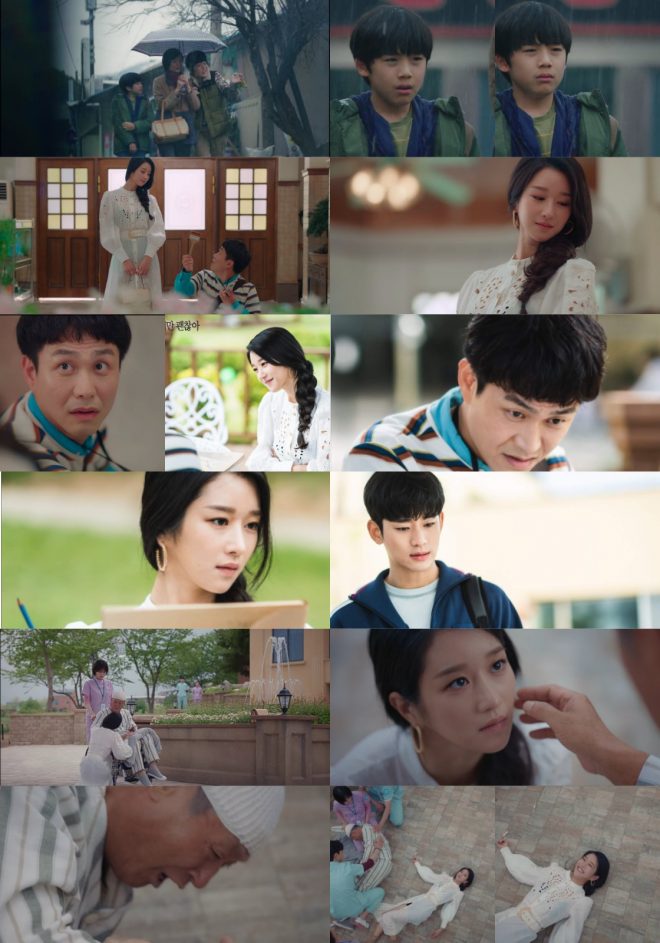 As Moon Gang Tae takes a bus home, he notices Go Moon Young striding slowly in the pavement. The state of the lady gets him worried but he does not stop while, Go Moon Young continues walking.

At home, after completing the house chores, Moon Gang Tae takes a look at the items inside his brother’s bag. First, he opens the sketchbook wherein there is a caricature of Go Moon Young who is flashing a wide smile.

Next, Moon Gang Tae pulls out a fairytale book The Zombie Kid which was written by Go Moon Young. Remembering that the author had suggested to read her book and give his feedback, he starts reading the story.

The Zombie Kid narrates the story of a young boy who was born different. All that the kid ever did was to eat continuously. The mother continued to feed the kid but nothing could appease his hunger.

In the end, the mother gave up her hands and limbs to feed him and was left with nothing but a torso. The Zombie Kid embraced his mother in her last moments and spoke for the first time saying that it was warm.

What did the boy really want? Satiating his hunger? Or feeling his mother’s warmth? 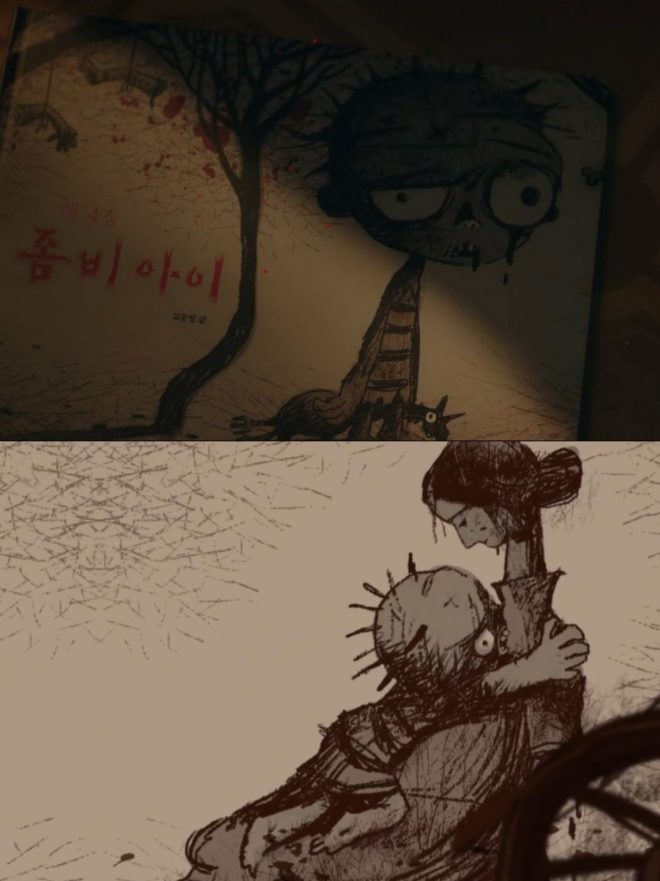 The Meeting in the Rain

Upon reading the book, Moon Gang Tae bursts into tears. Another flashback from the past shows Moon Gang Tae hugging his mother and feeling comfort in her warmth. But his mother tells him that he must always be there to take care of his older brother and that she gave birth to him for that purpose.

In that moment, Jo Jae Soo ( Kang Ki Doong) comes home who mentions the incident that occurred between Go Moon Young and her father at the hospital. On learning that they might not be so different, Moon Gang Tae goes to look for Go Moon Young in the rain.

He finds her still walking aimlessly on the street fully drenched. No words were spoken but they could feel the emotions of the other and then they finally fall into each other’s arms. 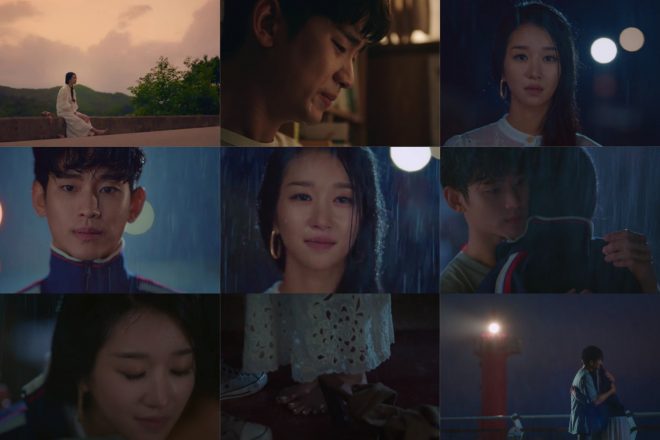 It’s Okay To Not Be Okay Episode 4 Afterthoughts

It’s Okay To Not Be Okay continues to engross with the way it touches upon some of the less talked about topics. The series has so far uncovered the different layers of the main leads.

If the previous episode was about how a person with a manic disorder views the world, this episode showcases how parents can be the root cause of their children’s pain. Episode 4 throws light into sensitive issues like parent’s negligence, favoritism among children and child abuse.

In Gang Tae’s case, his mother was too absorbed in taking care of the needs of the older brother. So, the thought of the younger one suffering never crossed her mind. Imagine being told by your parent that they only brought you to the world because they expected you to do something in return.

As for Moon Young’s father, he really considers her a monster and believes that she deserves to die. For people who are born different, they either receive help or are hated for being a burden. For Moon Young, it was the latter.

The story of Zombie Kid was quite heartbreaking and it makes viewers go through deep thoughts. It seems like each of Moon Young’s stories consists parts of herself.

With Gang Tae and Moon Young discovering a common ground, the future episodes hold a lot of promises. Though the fact still stands that as a person who suffers from antisocial personality disorder, Moon Young is still egoistic and manipulative. But with Gang Tae’s help she might be able to suppress her negative points and bring out the positives.

It’s Okay To Not Be Okay airs every Saturday and Sunday on tvN and is also available on Netflix for streaming. 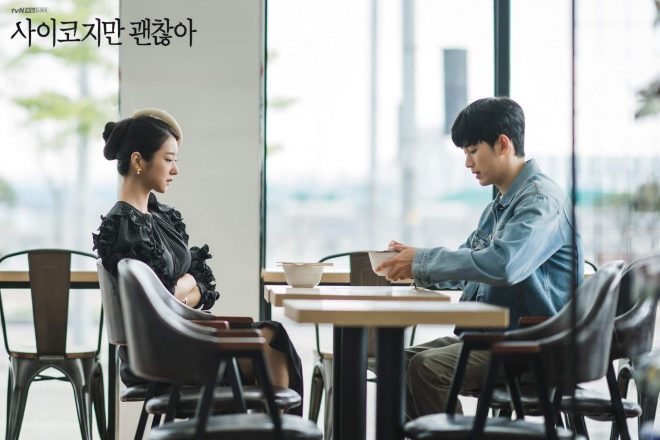